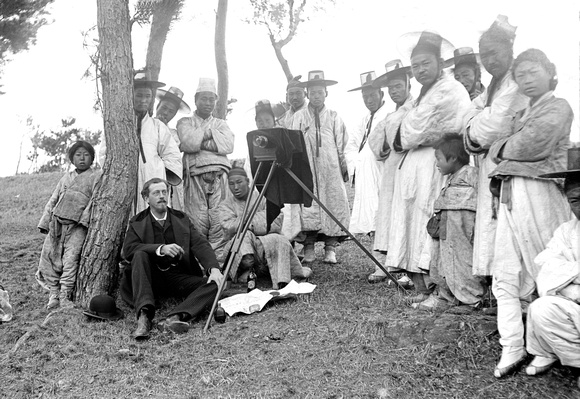 Percival Lowell, of the distinguished New England family, graduated from Harvard in 1876 with distinction in mathematics. Between 1883 and 1893 he traveled throughout the Far East during which time he wrote several novels "showing insight into the Oriental mind". He later began a career in astronomy; founded the Lowell Observatory in Flagstaff, Arizona; and began an intensive study of Mars. He gained some notoriety when he announced that the “canals” he discovered on Mars were proof of life on that planet.
Lowell settled in Korea after some years in Japan. He accompanied the first Korean delegation to visit the U.S. in 1883 as Secretary and returned to Chemulpo with part of that delegation. Woods' March 21, 1884 entry in the journal recounts a meeting with Lowell.
John Dowling
Powered by ZENFOLIO User Agreement
Cancel
Continue